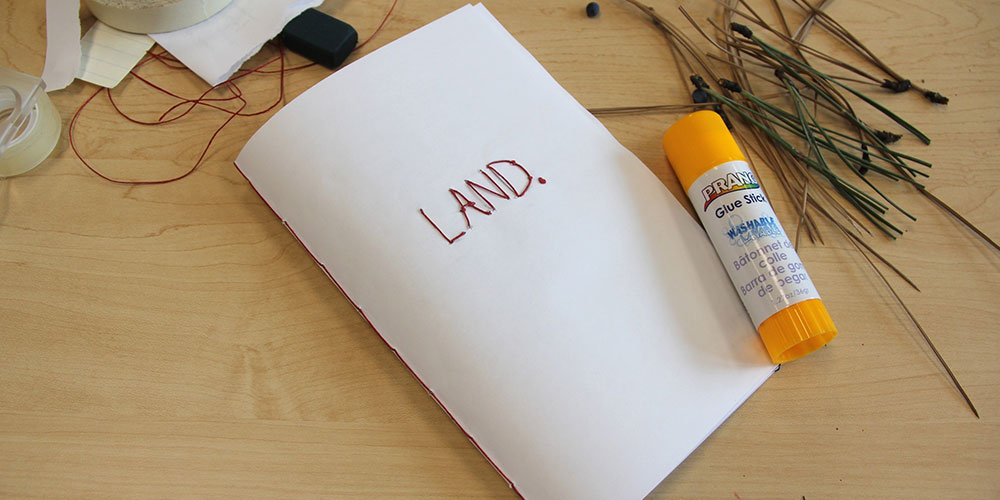 UBC Okanagan’s Indigenous Art Intensive offers an educational series of courses, lectures, art shows, and opportunities to create art. It features a series of world-renowned speakers, a variety of related undergraduate and graduate credit courses, and a group of resident artists who will be working to create a new body of work.

The Indigenous Art Intensive features a series of world-renowned speakers, a variety of related undergraduate and graduate credit courses, and a group of resident artists who will be working to create new works. The 2021 Intensive broadly engages the theme Site/ation, connecting to place through Indigenous territoriality, being grounded in land, voice and language, reconnecting to/nurturing traditions, and beyond.

The Intensive offers an immersive experience of undergraduate and graduate courses in Visual Arts, Creative Writing, Art History and Visual Culture, and Indigenous Studies, along with panel conversations, keynote addresses, art exhibitions and performances, readings, and various additional events and fieldtrips throughout – some planned, some impromptu.

The Indigenous Art Intensive is a unique program that brings international and national Indigenous scholars, curators and artists together on campus to interact with students in a residency context. Visiting artists will participated in a series of keynote presentations and artist panels once a week throughout May and June.

Siku Allooloo is an Inuk/Haitian Taino writer, artist, and land-based educator from Denendeh (NWT) and Pond Inlet, NU. She also belongs to a Dené Sųłine family and a strong lineage of storytellers/leaders on all three sides who have raised her to be close to the land.

Mariel Belanger , MFA alumna from UBCO, is dedicated to contributing in the growth of interdisciplinary performance arts as a method to engage Indigenous community, language, culture and act as a bridge to society telling stories of our time.

Lacie Burning is a Kanien’kehá:ka (Mohawk) multi-disciplinary artist and curator raised on Six Nations of the Grand River located in Southern Ontario. They work in photography, video, installation, and sculpture.

RYAN! Elizabeth Feddersen b.1984 Confederated Tribes of the Colville (Okanogan /Arrow Lakes /German /English) is a mixed-media installation artist who specializes in interactive and immersive artworks that invite audience engagement.

Eli Hirtle is a nêhiyaw(Cree)/British/German filmmaker, beadworker, and curator born and raised on Lekwungen territory (Victoria, BC). His practice involves documenting and creating work about Indigenous cultural resurgence, language revitalization, and identity.

Candice Hopkins is a writer, a curator and a citizen of Carcross/Tagish First Nation. Her practice explores the intersections of history, contemporary art and indigeneity.

Jaimie Isaac is a Winnipeg-based curator and interdisciplinary artist, member of Sagkeeng First Nation in Treaty 1 territory of Anishinaabe and British heritage. Her research focus is on Indigenous Curatorial Praxis, and methodologies in decolonizing and Indigenizing.

Dr. Michelle Jack is syilx/Okanagan of the communities snpintktn (Penticton, BC) and nisɬpícaʔ (Omak, WA). An Abstract Image Maker/Scholar who investigates the physical, mental, spiritual, and material.

Suzanne Morrissette is a Métis artist, curator, and writer from Winnipeg. Her research takes an interdisciplinary approach to investigate the historical lineage behind contemporary perceptions of Indigenous political knowledge in mainstream North American society, particularly those which characterize resistance to state powers as aggressive or anti-progress.

Audie Murray is a multi-disciplinary artist that works with various material including beadwork, textiles, repurposed objects, drawing, performance and video. She is Métis from Regina, Saskatchewan, treaty 4 territory.

Marianne Nicolson is an artist activist of Musgamakw Dzawada’enuxw First Nations and Scottish descent.  he is trained in traditional Kwakwaka’wakw forms and culture and contemporary gallery and museum based practice.

Sheldon Pierre Louis, a member of the Syilx Nation, is a multi-disciplinary Syilx Artist. Sheldon’s ancestral roots have influenced his works in painting, drawing, carving, and sculpting.

Anne Riley is an Indigiqueer multidisciplinary artist living as an uninvited Slavey Dene/Cree/German guest from Fort Nelson First Nation on the unceceded Territories of the xʷməθkʷəy̓əm (Musqueam), Sḵwx̱wú7mesh (Squamish) and səlí̓lwətaʔɬ (Tsleil-waututh) Nations.

Arielle Twist is a Nehiyaw, Two-Spirit, Trans Woman that creating to reclaim and harness ancestral magic and memories. She is an author and multidisciplinary artist.

Billy-Ray Belcourt (he/him) is a writer and academic from the Driftpile Cree Nation. He is a PhD student in the Department of English & Film Studies at the University of Alberta. He is a 2016 Rhodes Scholar and holds an MSt in Women’s Studies from the University of Oxford and Wadham College. His research interests stretch from queer, trans, and feminist studies to ethics to decolonization.

Carlos Colín was born in Guadalajara, Mexico. As a Latin American artist, one of Colín’s primary focuses are the concepts of baroque in the Latin American region, mostly in Mexico, how this is reflected and affected by elements and patterns since colonial times, and how we can see these baroque manifestations in the XXI century in Mexico and abroad.

Ryan Feddersen Confederated Tribes of the Colville (Okanogan /Arrow Lakes /German /English) is a mixed-media installation artist who specializes in interactive and immersive artworks that invite audience engagement. She was born and raised in Wenatchee, WA.

Tarah Hogue is a curator, writer, and uninvited guest on xʷməθkʷəy̓əm (Musqueam), Skwxwu7mesh (Squamish), and səl̓ilwətaɁɬ (Tsleil-Waututh) territories/Vancouver, B.C. where she has lived since 2008. Her work engages collaborative methodologies and a careful attentiveness to place in order to decentre colonial modes of perception within institutional spaces.

Liz Howard was born and raised on Treaty 9 territory in northern Ontario and is of mixed European and Anishinaabe descent. She received an Honours Bachelor of Science with High Distinction from the University of Toronto and an MFA in Creative Writing through the University of Guelph.

Jaimie Isaac is of Anishinaabe and British descent and is member of Sagkeeng First Nation.  She holds a Master’s degree from the University of British Columbia and a BA in Art History with an Arts and Cultural Management Certificate from the University of Winnipeg. Her MA thesis was titled, “Decolonizing curatorial practice: acknowledging Indigenous cultural praxis, mapping its agency, recognizing its aesthetic within contemporary Canadian art.”

Steven Loft is Mohawk of the Six Nations with Jewish heritage and is a curator, scholar, writer and media artist. He is the Director, Indigenous Arts at the Canada Council for the Arts. His research focus is in Indigenous art and aesthetics.

Dylan Miner is a Wiisaakodewinini (Métis) artist, activist, and scholar. He is currently Director of American Indian and Indigenous Studies and Associate Professor in the Residential College in the Arts and Humanities at Michigan State University.

Caroline Monnet is a multidisciplinary artist from Outaouais, Quebec. Her work has been programmed in exhibitions and festivals internationally.

Julie Nagam is the Chair in the History of Indigenous Art in North America this is a joint appointment with the University of Winnipeg and the Winnipeg Art Gallery.

Meghann O’Brien is a Northwest Coast weaver from the community of Alert Bay, BC. Her innovative approach to the traditional artforms of basketry, Yeil Koowu (Raven’s Tail) and Naaxiin (Chilkat) textiles connects to the rhythms and patterns of the natural world and creates a continuity between herself and her ancestors.

taisha paggett is a dance artist whose individual and collaborative interdisciplinary works re-articulate and collide specific western choreographic practices with the politics of daily life in order to interrogate fixed notions of queer black embodiment and survival.

Ryan Rice is a Mohawk of Kahnawake, Quebec received a MA in Curatorial Studies from the Center for Curatorial Studies, Bard College, New York, graduated from Concordia University with a BFA and received an Associate of Fine Arts from the Institute of American Indian Arts, Santa Fe, New Mexico. He has worked for the past 18 years within the museum/art gallery milieu at various centers including the Iroquois Indian Museum, Indian Art Centre, Carleton University Art Gallery, and the Walter Phillips Art Gallery.

Natalie Robertson (Ngāti Porou, Clann Dhònnchaidh) is a photographic and moving image artist and Senior Lecturer at AUT University, Tāmaki Makaurau (Auckland). Much of Robertson’s practice is based in Te Tai Rawhiti, her East Coast Ngati Porou homelands. Here, her focus is on her ancestral Waiapu River and the protracted catastrophic impacts of colonization, deforestation, and agriculture.

Sarah Shamash is a Vancouver based media artist and PhD candidate in the Interdisciplinary Studies program at UBC. Influenced by cinema, her experimental projects typically explore identities and geographies as personal, political, feminine, and dynamic, while critiquing and subverting fixed, colonial, and hegemonic demarcations of the body, territory, and space.

Richard Van Camp is a proud member of the Tłı̨chǫ Dene from Fort Smith, Northwest Territories. He is author of a number of books including children’s books, short fiction, novels and graphic novels.

Olivia Whetung is anishinaabekwe and a member of Curve Lake First Nation. She completed her BFA with a minor in anishinaabemowin at Algoma University in 2013, and her MFA at the University of British Columbia in 2016. Whetung works in various media including beadwork, printmaking, and digital media.